Why does voltage spike up when a new load is applied to a synchronous machine? 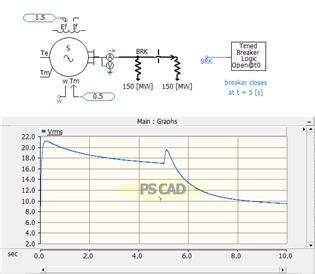 In the attached image, a synchronous machine is run with Ef and Tm settings similar to what you'd get from a governor and exciter (it's not in steady state, but it's close enough to illustrate the point). This is the standard 300 MVA/10kV(LN) sync_machine model from the Master Library, with no changes to the parameters except turning off the multi-mass interface.

Initially, there is a resistive load of 150 MW (@17.3kV LL), and then at time t=5s, a breaker closes and doubles the load. At this point, as shown in the Vrms plot, the synchronous machine's terminal voltage spikes upward briefly and then decays slowly. With resistive loads, this spike causes extra power to flow over the network, so the load rises by more than 150 MW initially.

I'm trying to do a transient study (with governor and exciter, not shown), and this voltage spike is causing problems. Can you say why voltage spikes up immediately after a load is added to the synchronous machine?

Answer this question   Report it
0

This question has not yet been answered.