How to set power, generated by the synchronous generator, in PSCAD?

How to set power generated by the synchronous generator in PSCAD? I tried many ways, but don't understand what determines the limit of generated power.
Status: Open    Apr 12, 2016 - 07:33 PM

Answer this question   Report it

And what about frequency? Is frequency stable in this case close to nominal value?

And this I did already, but the generated power is always greater than 125.03 :(

Please upload your PSCX file. We can check it and maybe we can find problem. Formula for rated power 3*U RMS (L-G)*I RMS (Line) is correct.

Hi, I have the same problem. Did you find a solution?

You are using multimass module. I have no experiences with it.. I thing, it shoult be source of your problems with ,,no limit power output of SM". Try to contact PSCAD support department at support@pscad.com. They can help you with this problem... however, I can see,that your parameterts of load are not correct. Rated voltage is L-G! (your value is L-L 230 kV). Similar for real power. Values are PER PHASE (type 3 phase value/3). Sorry that my help was not useful for you with power limit problem.
Best regards
Josef

A generator is a device that converts mechanical energy into electrical energy.

Synchronous generator is one of the most commonly used alternators. In the modern power industry, it is widely used in hydropower, thermal power, nuclear power generation and diesel power generation.

In addition, due to the regulating effect of the excitation system, the external characteristics can be artificially manufactured, which can be positive or negative. The positive external characteristic is that the terminal voltage decreases with the increase of the load current, and the negative is that the voltage of the terminal increases with the increase of the load current. The general excitation system can be adjusted within the range of plus or minus 15%.

Since the synchronous generator generally uses DC excitation, when the single machine operates independently, the voltage of the generator can be adjusted conveniently by adjusting the excitation current. If it is incorporated into the power grid, the voltage cannot be changed because it is determined by the grid. The result of adjusting the excitation current at this time is to adjust the power factor and reactive power of the motor.

The structure of synchronous generator is divided into high speed and low (medium) speed according to its speed. 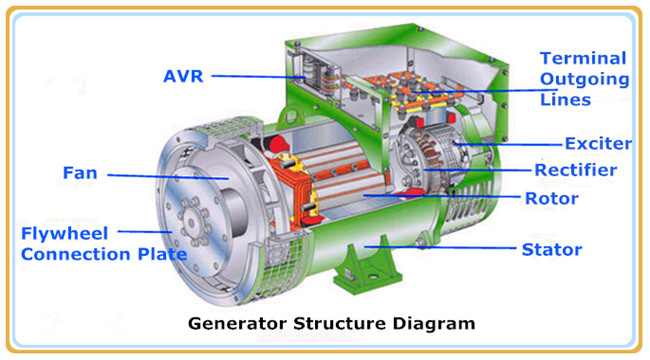 (3) Cutting motion: The prime mover drives the rotor to rotate (Input mechanical energy to the motor), and the excitation magnetic field between the polar phases rotates with the axis and sequentially cuts the stator phase windings.

(5) Effect value of Inductive potential: the effective value of the induced potential of per phase.

Hope it works for you.