How can I get the actual values of Ef and If of a synchronous machine? As an instance, the machine is rated 400 V, 330 kVA.

Answer this question   Report it

Ef0 and If are the output of machine in per-unit. Only need to convert them to volt and amp

That's right, Ef0 and If is output and Ef is input, just please note that usually the base value for converting Ef from pu to actual value is different from base value of terminal voltage( this is detailed in link included following answer)

Hi dear AliReza,
PSCAD has a standard synchronous machine model can be used as a motor and/or generator. The parameter of Ef (and so If) of a synchronous machine isapredeterminedvalue. You can find that in machine’s tag or data sheet. Please note that this parameter must be entered to model in pu value. For read more about per-unitize calc of Ef visit following thread:

Electricity. Since the synchronous generator generally adopts DC excitation, when the single machine operates independently, the voltage of the generator can be conveniently adjusted by adjusting the excitation current. If it is integrated into the grid operation, the voltage is determined by the grid and cannot be changed. At this time, the result of adjusting the excitation current is to adjust the power factor and reactive power of the motor. 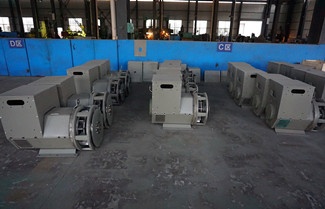 Induction generator is a motor that uses electromagnetic induction between the rotors to induce current in the rotor to achieve electromechanical energy conversion. Induction generator has the advantages of simple structure, firmness, small size, light weight, less auxiliary equipment, convenient operation and maintenance, etc. Especially the independent operation of induction generator makes it very practical for remote mountainous areas or power shortages that cannot be covered by power grid. Towns and villages or as an emergency backup power source.

Also known as "asynchronous generator". An alternator that utilizes an air gap rotating magnetic field between a stator and a rotor to interact with an induced current in a rotor winding.